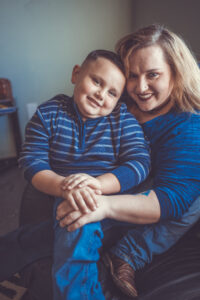 Kerri was born in Marble Falls, Texas. Although she lived in this beautiful small town, her childhood was anything but idyllic. Her father lost custody of her at the age of 2, and she was sent to live with her mother, a woman struggling with a meth addiction. Soon after, her father took his own life. Kerri’s early years were tumultuous, and she was often neglected.

As a young adult Kerri took her mother’s path and become involved with alcohol and drugs. This life left her vulnerable to trauma and violence. Beaux, her pride and joy, was born into these unsafe surroundings. Beaux’s father was physically abusive and violent with Kerri for years. She was not providing a safe home for Beaux to grow up and she knew it, so she got away to protect her son.

However, she could not find a safe and stable living arrangement. This resulted in her first case with CPS. Kerri was lost as to how to navigate the child welfare system and although she got her son back temporarily, it did not last. She was soon arrested for intoxication and child endangerment. Beaux was placed in foster care.

Kerri faced three years of probation or the offer to be placed in treatment to start rebuilding a life in recovery. Kerri made the choice of recovery. She chose Santa Maria to restore her life.

Kerri participated in her first substance use and trauma treatment alone at Jacquelyn House. There she met Tommy Austin, our court liaison, who offered her assistance in navigating her case with the possibility of regaining custody. Kerri says, “Tommy said that I was someone who was smart, put together and all I needed to do was learn how to talk to those making the decisions and do all they asked to get my son back. He gave me hope and promised to work with me.”

Tommy made sure Kerri was prepared to advocate for herself. She requested an additional stay at our Bonita House where Beaux could live with her under supervision. Thankfully, she was allowed temporary custody of her son. She began parenting Beaux, learning to be a good mom and to include recovery basics in their lives. For her next step, Kerri chose to live in Santa Maria’s recovery housing which provided continued support for the family’s journey through individualized case management.

Tommy continued to guide her, now including Beaux in the counseling. Soon, Kerri was awarded full custody of Beaux. “Without Tommy there to show me how, that would have never happened,” says Kerri. “I would have given up long before, thinking that Beaux would be better off without me.”

Says Kerri today, “After I addressed my trauma and addiction, a light flicked back on in my life. I can be silly with my son, enjoy life and have dreams.”