2021 Fall Newsletter -sharing our Good News with you! 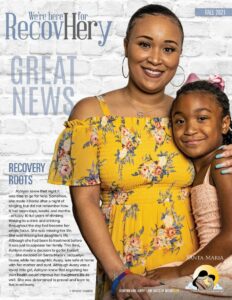 Ashlynn knew that night it was time to go for help. Somehow, she made it home after a night of binging, but did not remember how. It had been days, weeks and months- actually 10 full years of drinking. Waking to a drink and drinking throughout the day had become her whole focus. She was missing her life. She was missing her daughter’s life.

Although she had been to treatment before it was just to appease her family. This time, Ashlynn made a decision to go for herself. She decided on Santa Maria’s Jacquelyn house while her daughter, Avery, was safe at home with her mother and aunt. Although Avery was a loved little girl, Ashlynn knew that regaining her own health would improve her daughter’s life as well. She was determined to prevail and learn to live in recovery.

Aslynn was assigned an amazing counselor who helped her understand things about her past, slowly and surely. She remembers, “At each session I cried and without being rushed, I was guided with grounding tools to recognize the hurt that was buried, way back. I quickly learned to allow those feelings to rise and then move forward. The other sessions and groups on recovery made a huge difference. Within 90 days, I had the tools to move to Paschall House and have Avery join me.”

Ashlynn continued her recovery work with guidance and support from her coach, Amelia Murphy. She attends meetings three times a week where she has found a small, tight-knit group of women in recovery. She has a sponsor and is completing her step work. Thankfully, Ashlynn was honest with her employer about her health struggles and they allowed her to take advantage of FMLA and then return to her job. Since returning, she has been promoted and has a bright career future.

The women living at Paschall and working to rebuild their lives embraced both Ashlynn and her daughter, Avery. The residence at Paschall is peer- led sober housing based on the Oxford House model. It allows the women who live there to build independence, constantly honing their recovery skills. Avery also received many services to assist with the transition and is flourishing. Today, she is a vibrant 7-year-old, attending second grade. Mother and daughter are close and loving, living through their first year of residence together since Ashlynn began her healing, bonding in new ways.

Says Ashlynn, “Santa Maria literally changed my life, but I had to be ready for those changes. It required that I be willing to do what was necessary for myself, including opening up and being interactive and honest about my life. If I didn’t speak up, those things that had held me in bondage to drink would have continued. I did everything in my power to participate, to change and to be a better me.”

She realizes that she must keep that mindset and continue to build her own “recovery capital.” With those choices, her life continues to fall into place. The tools and support she received at Santa Maria give her the structure and stability to venture out on her own.

SHE IS THE FACE OF RECOVHERY.