Her father had always been frightening. He loomed large over her, in rages that would often end in severe and painful “punishment”. Trying to protect her two younger sisters, she would stand in his path and take the blows herself. When her mother tried to step in, he would turn his anger towards her and her mother would often be badly beaten.
But life took an even darker turn when her father drove her to a small house with a fence around the yard. There, she was “sold” and taken in the trees surrounding the property by a stranger. This began a pattern of being given to men she did not know. They did unspeakable things to her. She was five.
For Maria (not her real name) the years before she came to Santa Maria were filled with violence and continued abuse. Rarely did she feel safe and there was always someone who profited off her pain. Finally at the age of 24, Maria found a place where she could begin to heal.
Maria now finds the support she needs in a network of agencies that understands human trafficking on a deep level. She has received treatment for substance use, counseling, job training and life skills. As she gains her independence and stability, these non-profit agencies assist her with the healing and the skill development she needs to become independent. She has identified two crucial components to her journey in recovery- finding a place that she felt safe and accepted and working an understanding trauma counselor.
“Only in my trauma counseling sessions, did I finally open up to the abuses, the violence and the humiliation that I had suffered. I found a safe way to finally speak about the pain and the hopelessness that was my life,” she says.
Although trauma counseling is vital to recovery for those that have experienced trafficking, it is costly and requires extended sessions.  At the beginning of the year, SMH was seeking funding to add to our roster of available counselors.  We did not want to be unprepared for the many clients who required these life-changing services. We wanted to add a part- time counselor to our staff.
Self-described, Houston 20 is a” growing group of influential and committed Houstonians who are forming a movement to advocate for the end of sex trafficking and sex trade in our city by supporting the non -profit organizations providing direct services to victims and survivors.” Their influential circle advocates for policy, funding and attention to the scourge of human trafficking.
In addition, they have created a non-profit team, Houston Area Against Trafficking (HAAT), comprised of direct service providers who share best practices and needs in a spirit of cooperation. Houston 20 fills the gaps and increases the capacity of these agencies to everything from bottled water and grocery gift cards after a disaster, to direct support for programming and large items needed to continue services, safely and with dignity. The collaboration is enhanced by leadership and focus from Houston 20 co-founders Jennifer Hohman and Amy Pierce.
We are grateful to Houston 20 for their funding, but just as important, we appreciate their kindness and concern expressed through notes, check-in’s and kind words to our staff.  They are living their mission and making a real-world huge difference.

#FightForUs is a Social Community Movement to raise our voices and combat sex trafficking. 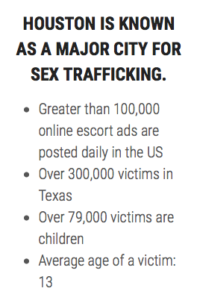