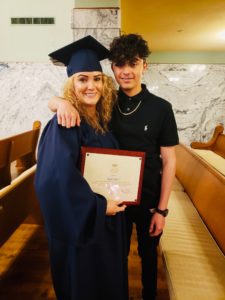 Nicole followed in her mother’s footsteps, she learned to close her feelings off working long hours and withdrawing from her family.   This was not the first time she had lived her life this way. She put in many hours every day at her restaurant job and then socialized occasionally.  Soon, like times in the past, she began to drink heavily and use cocaine with “friends”.  She felt very alone.

She met a charismatic man on-line, excited to have someone to share life with – both he and his family seemed the right answer to her loneliness. He began to spend all his time with her, moving into her home, borrowing her car and sharing the drugs he took frequently. But soon, his destructive and frightening behavior emerged and her life was being controlled more and more by their drug use and his threats and violence. By that time, she was afraid of him. She stopped spending time with her kids, embarrassed by the things she was going through.  Her life was quickly consumed and spun out of control as they both began to use more and more PCP.  In the spring of that year, he died at Ben Taub Hospital from an overdose.  Although she was free from him, she was addicted to PCP.  She was arrested that summer twice for possession and her court appointed attorney recommended STAR Court, Harris County’s diversionary drug treatment court. Through that program, she was sent to Santa Maria’s residential treatment.

She spent 90 days in treatment and soon began remembering underlying things that she had repressed.  She soon realized that her life had been troubled for some time, with untreated grief and trauma.  She became open and accepting of the help, talking to her counselors and heeding the advice of her peer recovery coach. She learned to trust the process and have patience.  Nicole was introduced to the resources and groups of the recovery community.  She found peers who understood her and through their stories and struggles, she learned to trust her own recovery path. She found that her own patience was rewarded and she grew stronger.

Nicole’s biggest desire was to reconnect with her children.  She slowly started her life over again and gradually put her youngest son back in her life.  Her daughter and granddaughters followed. She regularly talks with her mother.  She is learning to be a better mother every day. She enjoys her family, now more than ever, learning the hard way what is was to be disconnected.

She has also connected with her God and her faith, attending Mercy Street Church (a resource she discovered through SMH).  She prays now.  She has found her humble side and regularly stops to breathe and find her feelings.  Her recovery meetings also keep her grounded, providing supportive friends that she can lean on.  Journaling is also an important part of her healing.

Nicole successfully graduated from the STAR Court program, this past March.  She is living in transitional housing at Jacquelyn and has started back to work after the stay-at-home orders were lifted. The future looks bright to her for the first time in a long while.  She has hope.

She is the Face of RecovHERy.