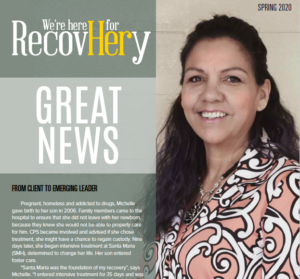 From Client To Emerging Leader

Pregnant, homeless and addicted to drugs, Michelle gave birth to her son in 2006.  Family members came to the hospital to ensure that she did not leave with her newborn, because they knew she would not be able to properly care for him.  CPS became involved and advised if she chose treatment, she might have a chance to regain custody.  Nine days later, she began intensive treatment at Santa Maria (SMH), determined to change her life. Her son entered foster care.

“Santa Maria was the foundation of my recovery”, says Michelle. “I entered intensive treatment for 35 days and was not referred to the supportive program. I was sent home.” The counselors told her that she did not receive a referral because she was not fully participating.  “They saw what I didn’t see”, she says.  On her knees, praying for help, she promised she would enter any door that was opened to her. Her boyfriend made a call to SMH to ask for another chance and when granted, convinced her to return.  This time, she was fully engaged.  She completed her supportive program and six months of outpatient treatment.

Since then, she has never looked back.  Her journey was fraught with fear and challenge, but she has learned she must put her recovery first and let everything else follow. She attended meetings, joined Mercy Street Church and gave back to others by volunteering and advocating for her peers.  She trained to become a Recovery Support Services coach serving SMH and our community for the past nine years. She has become a highly active community advocate, a mental health fellow and a great wife and mother.

Michelle did not see her son for the first month of his life and after that only had a one-hour supervised visit every two weeks.  Meanwhile, the key players on her team saw real change in her with a true commitment to recovery..  For the first time in many years, she saw people fighting for her.  “I can’t emphasize enough the importance of having someone believe in you.  After all those years of being shunned and hiding, it meant everything that people began to see me differently.  Their belief became my own, in myself.” Ultimately, she was given custody of her son and was able to take him home.  He is now a happy, typical 13 year old living with his family.

Fast forward several years and Michelle is again employed representing SMH with the Ben Taub MOM program.  Michelle says, “I love the team.  They treat me with respect and value my life experiences.  They are the right people, on the right path, at the right time.”   “We are honored to have such a long-term relationship with Michelle,” says Nadine Scamp, CEO.  Client to emerging leader, she is the face of RecovHERy.