April Dawn, The Face of RecovHery 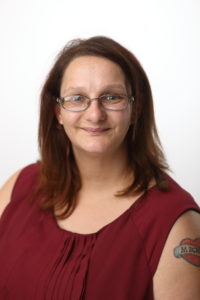 April Dawn was born in a small town in the hills of southeastern Kentucky, given a name that illuminated the light, beauty, and joy of a newborn’s arrival to the world. Somehow, her infancy and childhood became, instead, a nightmare of abuse that left her scarred permanently and alone with her pain and humiliation. April’s parents did not offer love and protection, but were responsible for her abuse.  At the age of four, she was hospitalized for six months to heal internal wounds.  At 13, she was “sold” to a man that took her away from her home and married her with parental consent.  The time in between was a constant story of abuse at the hands of those who were supposed to guide her growth, treasure her spirit. There was no intervention.

To mask her searing emotional and physical pain, she learned to numb her feelings with alcohol, taking her first drink at age 9 and becoming a full blown alcoholic by age 10.  By the age of 15, she almost died from alcohol poisoning and it still turns her stomach to think of drinking.  She found opiates and meth as a replacement to numb her pain.  “I knew I was numbing, when I felt sad, that was my clock… I knew it was time for more drugs.”  She suffered through three abusive marriages and brought four children into the world.  She had periods of sobriety, trying to be a good mother on her own.  Although she was not actively using drugs, she did not did not receive treatment for her loss and trauma.  “I had seven years sober, but I was not in true recovery….I know that now.” Her sobriety did not last. Eventually, she lost custody of her three children and a fourth died.  Her life was again spiraling downhill.

Eventually, April was sent to inpatient treatment by Harris County, a condition of her probation for a possession charge.  This offer of treatment over jail time turned her life around. She spent 30 days in the county program and was released with a determination to stay on a straight path.  However, she found herself returning to a very unhealthy situation in a home in Baytown. She simply was not surrounded by the support needed to change her life, but rather the temptation to return to a life of misery. Without a safe place to stay and in danger of being at odds with her probation orders, she called her peer recovery coach Deborah who dropped everything and came to April’s side. Deborah was available because Santa Maria’s coaching team is attached directly to the county treatment program that April had just completed.  Participants in the program are given a lifeline contact number to keep close and encouraged to reach out for any need or concern.  Coach Deborah brought her to Santa Maria, recognizing that additional treatment and support were absolutely necessary.  The staff at SMH coordinated with April’s probation officer and made sure she was compliant with court orders.  April began her 60 day treatment in our intensive program.

While in admissions at Santa Maria, April said, “I saw a sign that read trauma informed care which I didn’t really understand, but I knew that my life was filled with violence and that I needed that.”  Safe in her room and at the Jacquelyn campus.  She could identify with every other client and learned much from their stories.  With the help of her counselors, she began to rebuild her trust and confidence. She opened up in recovery, looking at the real reasons that she had become an addict.  She found that she had suppressed her feelings for years and came to understand that the abuse, fear and humiliation were connected to her life choices.  She became more resilient, believing she could live her life and thinking differently about her future. April began to envision a different kind of life.

Near the end of her program, she discovered that she needed to have faith in something outside herself, that she could not do it on her own.  For months, her coaches and counselors had held her faith and her inspiration.  She was angry with God, for the abuse and for the loss of her children.  Again, a peer recovery coach guided her to her next safe haven.  April moved to a faith-based treatment campus for the next period of healing.   During her participation, she set down her anger with God and made an important spiritual and emotional shift.  She discovered a belief system that had never been presented in her life.  She blossomed.

Today, April Dawn is back at Santa Maria. She is hard at work earning her GED through our education program.   She is living in sober housing on our campus at Paschall.  She is enjoying reunification and some limited involvement with her children, thanks to the support of our CPS liaison services.  They are all receiving family counseling and although she won’t regain custody anytime soon, she is healing with them through their efforts.  She jumps at the chance to stay connected to the community of those in recovery.  She is active in our PAC (Peer Advisory Council) and jumps at every opportunity she can to tell her story to others that are struggling.  She dreams of a shot at working in technology, learning programming skills; a dream she never dared voice before.

After an entire lifetime of violence, trauma, addiction, and defeat April Dawn has worked with her team to create a supportive structure for healing and hope.  That structure is as individual as her own story and has been “wrapped around her” for maximum success.  It takes the extensive and dedicated work of an entire staff, in concert and with great compassion, to both recognize and provide all of the services a woman needs to be whole, perhaps for the first time in her life.

When asked how she feels, she says “Victorious, I am victorious.  With drugs there is nothing but death at the end, but with recovery there is anything that I want.”  She is the face of RecovHERy.