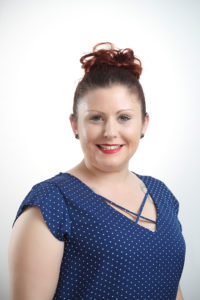 Kristina began to “lose her grip” when her husband, the father of her small daughter, lost his life. She turned to Santa Maria in 2012 for the first time to begin treatment. For a long while after, she maintained her sobriety and began to build a new life – but then she felt it all “crumbling inside”. She phoned her former SMH counselor, Lucia DePaoli, a phone number she had kept close, and asked if she could return for more treatment. She was accepted with open arms.

Often, recovery does not follow a straight ascent. There are trials and barriers that knock an individual down along the way. It is in the learning from attempts at sobriety where hope emerges from desperation. An individual remembers that there is a community that cares and is willing to assist. Humbly asking for help is the first step to resume the journey.

This time in treatment, Kristina was able to focus on her early childhood trauma and loss through important sessions with her guiding counselor. Her individualized trauma therapy made all of the difference. She began to realize that the early onset of poorly treated childhood depression had hijacked her development and future.

She completed medical detoxification followed by 90 days of treatment at Jacquelyn House. Her daughter waited under the watchful eye of family, whose support and love pulled Kristina through. Then, to her great delight, her seven year old daughter joined her in their new transitional apartment on the Bonita House campus. That first day together, they enjoyed the simple pleasures of the playground and a chance to sit in their new home, braiding hair.

Kristina is determined to give her daughter a life of possibilities. She makes times daily to listen and validate her thoughts and keen insight. She is grateful for the play therapy that is afforded to her child. She relishes in the conversation and the expression of her daughter’s feelings, a skill her child has learned through counseling. Kristina plans to obtain a certification in Recovery Coach Training and begin anew helping others to find the community of recovery. She is the face of RecovHERy.