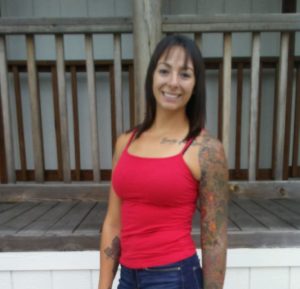 “The best way to predict the future is to create it.” – Peter Drucker

When you first meet Danielle, you see a smart, strong, disciplined and spiritual young woman who is striving to succeed in her recovery. Her main motivation is her love for her two children with whom she recently regained full custody.

She has turned a corner on a life filled with trouble, a life that was never easy for her. From the time she was a child, she watched her parents face life under the influence of drugs and alcohol. She was offered her first drink at the tender age of ten, by her father. Spending time with him, meant spending time in bars. Just two short years later, she was introduced to drugs by a family friend. What followed were ten years of deepening dependency as she cycled through juvenile detention and later adult incarceration. Eventually, she found herself a young mother, hooked on a variety of drugs and the loss of temporary custody of her son through a CPS charge of neglect. That finally got her attention and offered her the first shot at treatment.

Unfortunately, it did not stick. Once more, she was sent to jail for a possession charge. She discovered that she was pregnant and transferred to the WHO program (Women Helping Ourselves)* here at Santa Maria. It was a critical moment for her. “Every time before, I was able to manipulate myself out of a bad situation, but this time I had burned all of my bridges and exhausted all of my resources. I was done. I surrendered, “ she says.

This acceptance allowed her to focus on her recovery every day. From April to December 2013, she successfully completed her residential program, following it with Intensive Outpatient services for another seven months. She focused on building a new foundation, developing coping skills and a support system. She bonded with her baby girl who was born healthy in October of that transformational year. She learned parenting techniques. She quickly found a job, starting with an entry-level position, working her way to something that provides stability for her family today.

Life in long-term recovery has really paid off for Danielle. She keeps what she has achieved by service to others who are struggling. Sharing her story and living one day at a time in faith provide her the way forward. Best of all, she is sharing a future she created with her children, providing for them with love and gratitude.

* The WHO program is an alternative to incarceration for women who are pregnant, post partum or who have serious health issues, all dominated by substance use disorder. Santa Maria reserves 16 beds for the vital program that begun in 2005. The success rate is astounding with 75-80% of graduates staying clean and sober and out of jail for a year past completion of the program.